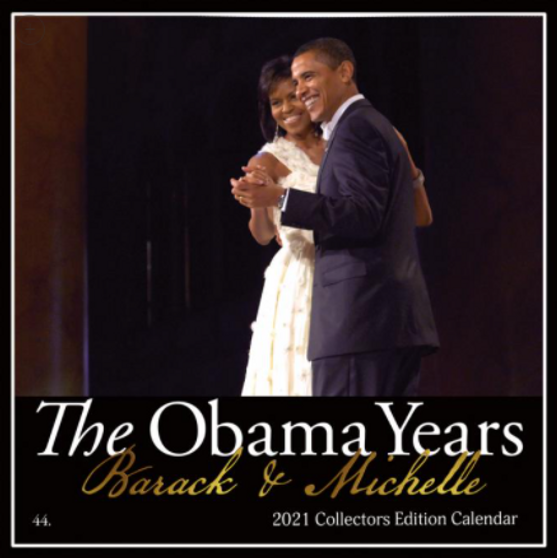 The Obama Years 2021 African American Wall Calendar is a special Barack & Michelle Obama edition of The Obama Years, highlighting the couple throughout the trailblazing presidency.  Featuring iconic images with narrative descriptions, you will relive these great moments of our history. Remember Barack Obama’s historical presidency as the 44th president of the United Stated of America. Packed with black history facts throughout, you will discover something new every day in The Obama Years 2020 African American Wall Calendar. Commemorate the ‘Obama Years’ with this keepsake calendar. Let us always remember that “Yes We Can! Yes, We Did!”

The Obama Years 2021 African American Wall Calendar is back – get yours before it sells out!

The presidency of Barack Obama began at noon EST on January 20, 2009, when Barack Obama was inaugurated as the 44th President of the United States, and ended on January 20, 2017. Obama, a Democrat from Illinois, took office following a decisive victory over Republican John McCain in the 2008 presidential election. Four years later, in the 2012 election, he defeated Republican Mitt Romney to win re-election. He was the first African American president, the first multiracial president, and the first president to have been born in Hawaii.

Celebrate 2021 with The Art of Annie Lee 2021 African American Wall Calendar. Annie Lee is one of th…

Be Your Own InspHERation 2021 African American Wall Calendar by Kiwi McDowell features a whimsical, …

Dream in Style! The I Am Powerful convertible neck pillow offers the perfect support for your neck a…

Express your sentiments with a Recycled Metal Bicycle Chain Bowl, which has been handmade by the art…

Capture your memorable moments with this hand crafted photo frame made from recycled bicycle chains.…

A perfect example of innovative recycling in action, this bicycle chain has been crafted into a tea …

Size: 10 x 8inThese wall clocks feature a precision quartz movement with a resin finish on top of a …

My Cup Runneth Over Wall Hanging